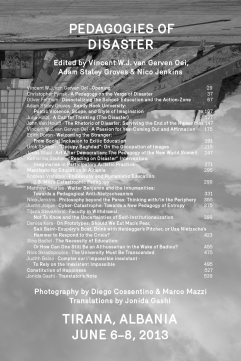 A bilingual edition of the conference proceedings of the ‘Pedagogies of Disaster’ conference has been published by Punctum books, available to download as a free ebook or to buy in paperback.

This contains papers by Christopher Fynsk, Judith Balso, Oliver Feltham,  and many others, as well as my contribution on ‘Walter Benjamin and the Inhumanities: Towards a Pedagogical Anti-Nietzscheanism’:

The following discussion is intended as a critical intervention into recent debates about the “crisis of the humanities,” reading the symptomaticity of crisis in the medical sense of a turning point. It does so from the perspective of the work of Walter Benjamin, whose own transdisciplinary practice of thought has been characterized as a “philosophy directed against philosophy” and a “philosophizing beyond philosophy,” and stands as a model for the kind of intellectual and para-academic activity evoked here. Historically re-situating Benjamin’s famous allegory of the Angel of History from the twentieth-century context of the “crisis of culture” to the contemporary “crisis of education,” it attempts to reconstruct a dialectical understanding of pedagogization within Benjamin’s work, which is used to sketch out the contours of a critically reimagined pedagogy of the Inhumanities.

You can download a free copy of the book from here:

One thought on “Free ebook: Pedagogies of Disaster”